Photo from the book, Memoirs of Elleanor Eldridge

“Born in 1784, Elleanor Eldridge knew the meaning of networking, relationship and focus. The youngest of seven daughters, she began working as a laundress at age ten following the death of her mother. Industrious and naturally bright, she quickly became adept at arithmetic, spinning, weaving, cheesemaking, and all types of housework. She was known for her skill with numbers, at age nineteen Eldridge took over her deceased father’s estate and quickly opened a business with her sister in Warwick, Rhode Island, weaving, nursing, and making soap.

Through hard work and strategy, she was enabled to purchase a lot of land on Spring Street, in Providence, upon which she built a house, which she at several times enlarged until it became, to her, a valuable property, and was nearly paid for. It had cost about US$2,000; on it there was a loan of US$240. On this loan, she paid an annual interest of ten per cent. Having an opportunity to purchase another estate adjoining her own, which materially improved her means of access to her house, she bought it for US$2,000, upon which she paid US$500 cash and gave a mortgage of US$1,500 on her entire estate.

Being taken sick, she rented her property and went away to recover her strength. While gone, the gentleman from whom she borrowed the US$240 died, leaving his estate to his brother. This brother attached Elleanor’s property, sold it by the sheriff, and he himself bought it for exactly the amount of the mortgage. Elleanor returned to find herself deprived in a moment of an estate which had cost about US$4,000.

She was not a woman who would submit quietly to such proceedings, and immediately set herself to work to obtain justice. General Ray Greene, Attorney General, assisted her, as did many of the best citizens of Providence, to whom she was well known. To assist in raising money, Memoirs of Elleanor Eldridge was written, and several editions sold. A companion volume, entitled Elleanor’s Second Book, was published in 1847. These efforts were successful. Eldridge recovered her property after paying heavily for it, and lived to old age. She died around 1845”.

We're not around right now. But you can send us an email and we'll get back to you, asap. 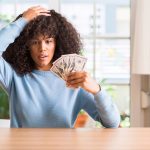 The Raw Truth: What They Don’t Want You to Know About MoneyArticles, Featured Articles